A new file chooser for GeoServer

I normally don’t mind when running GeoServer locally, but it sure gets annoying when GeoServer is deployed on a remote host and a ssh session is needed to pick up the exact paths.
However it’s really doing GeoServer workshops that one sees poeople used to desktop software getting out of their comfort zone with this “type a path” thing.

So lately we’ve been developing a patch adding an interactive file chooser that allows you to pick a file or a directly but simple point and click. Let’s have a look: 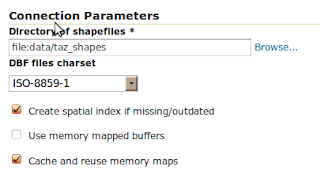 If you want a more dynamic display ve’ve also made a quick screencast (apologies for the low quality of it) that you can download from the GeoSolutions demo server. If you are on Linux you should be able to display the OGG Vorbis format directly, on other platforms you can install VideoLan to play it.

This new functionality will soon land into a GeoServer 2.1.0 near to you 🙂 .