Dear All,
in this post we would like to introduce an application which we have been working lately here at GeoSolutions in order to cope with the requirements coming from enterprise deployments in terms of Authentication and Authorization for GeoServer, which we have called GeoRepository since we want to make it grow even further in the near future.

Whoever has been facing the technical problems involved with deploying GeoServer inside an enterprise infrastructure following the SOA knows in such context Authorization and Authentication capabilities are usually provided by external services in order to centralize A&A services, fostering reuse of existing capabilities, minimize risk of duplication of functionalities and as well as to avoid duplication of users’ credentials. Moreover in such context Single Sign On (SSO) services are usually a must-have.

GeoServer comes with an integrated security subsystem that is able to handle both Authentication and Authorization which is quite powerful and customizable, however we needed even to extend it further in order to be able to provide fine grained control over users’ authorizations as well as in order to better integrate with existing A&A services.

A typical and yet simple usage scenario for GeoRepository is depicted here below. 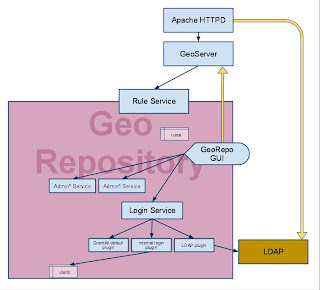 In these setups GeoServer is normally not exposed directly, there is normally a load balancer as well as an Apache configured to perform duties such as single sign on authentication, SSL encryption and connection with external monitoring tools such as Nagios or Hyperic.
As suggested the authentication is performed by Apache HTTPD via LDAP; GeoServer will therefore be responsible only for the authorization based on the current user. In order to do this, GeoServer communicates with GeoRepository in order to retrieve users’ authorizations query limits (we will get to this later) and then applies them accordingly to the incoming requests (thus avoiding post-encoding filtering, see also this white paper comparing internal vs external security systems).

In order to make this approach possible GeoServer was modified by Andrea Aime, the author of the existing Security Subsytem as described in the picture below. GeoRepository obtains users’ credentials from LDAP and allows administrator to decorate them with additional parameters which are specific for restricting GeoServer access to services and data (we will describe them shortly). 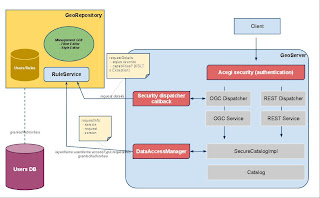 Now that we have seen the 10000 feet view let’s delve into details of how us know provide additional details on how GeoRepository seamlessly applies specific geospatial access policies to one or more GeoServer instances
The possible types of authorizations that can be applied using GeoRepository are controlled via generic rules with priorities , are shown below.

Each rule comprises of:

For ALLOW and LIMIT grants we can, under some conditions, set also additional limits which are called details.

It is worth to point out that GeoRepository interprets rule by priority: higher priority rules (represented by a smaller integer number) are applied before rules at lower priority. Like in IPTABLES, the first match is considered valid and then executed.
The possibilities introduced by having GeoRepository work right next to GeoServer are quite a lot, let us list some of them:

As an example of full versus limited access to resources, check the difference in the following two layers previews. First one show administrator’s preview, second one shows unprivileged user’s preview, where some the attributes are hidden, the default style is forced by the access control and the geometries outside the restriction area have been . 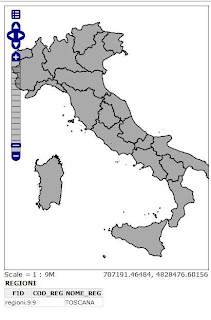 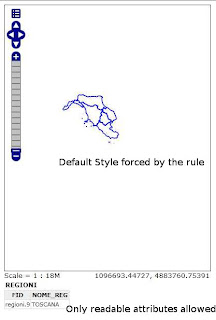 We should set up an inline demo soon, meanwhile, if you want to know more about the features we currently support or about our roadmap, please, do not hesitate to contact us.
Regards,
the GeoSolutions Team