Dear All,
in this post we would like to describe how we did help one of our clients to troubleshoot its GeoServer and GeoWebCache deployment in order to quickly respond to a tremendous peak in the number of accesses to the geportal sitting in front of this deployment. Unfortunately we cannot name the client or the portal explicitly, all we can say is that we are talking about a nationwide geoportal for an Eastern European country.

The data that is served by the system comprises of around 2 TB of raster data (mostly nation-wide ortos) plus another 60 GB of vector data (mostly cadastrial parcels).
The initial deployment had the objective to support 100 requests/seconds (with avg response time of 3 seconds and maximum response time of 10 seconds) split among 40% for GeoServer and 60% for GeoWebCache, since most vector layers were visible only at high resolutions with no tile caching due to the extensive usage of labels (with a desire to get the best possible label layout, which is often broken by tiling).
The initial set up we put in place is described in the picture below.

For this specific project we did investigate deeply performances of ImageIO-Ext with large BigTiff files and we come up with some nice optimizations that are crucial for loading metadata without using a lot of memorys when inner tiling is used; these tweaks also have the side effect of improving performances of read operations on huge files by at least an order of magnitude which brings us a niche scalability improvement in GeoServer which we measure in 40/60% more throughput!
These improvements will be part of GeoServer 2.2.0 and 2.1.5.

The system was launched on a Thursday and we soon realized that we had to endure a load much higher than expected: the peak load we saw at the balancer was above 7000 requests /seconds and the performances of the system were sinking therefore we had to react quickly.

We first analyzed the requests that we where getting and therefore we decide to do what follows:

In the picture below the new set up we put in place is described. 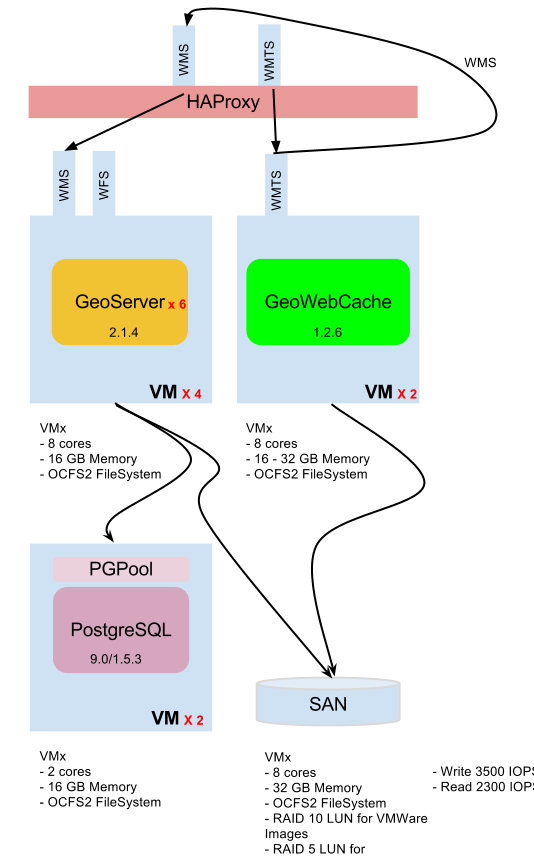 The whole process took us from Friday to Monday early morning, the client’s team did most of the work and  we just provided them help and guidance for GeoServer and GeoWebCache. Long story is, it is very difficult to forecast the load your webapp will endure during launch time, however, with right team and the right tools we can make GeoServer and GeoWebCache fly! We are confident that  we can provide some specific hints to scale your Open Source SDI.

It is eventually worth to mention that this work was performed under our GeoSolutions Professional Service, therefore if you have similar needs, do not hesitate to contact us!